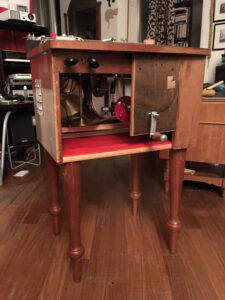 Luca Collivasone:  “Cacophonator, The Concrete Music Machine”
Luca Collivasone presents his Live set in which the only musical instrument present is the Cacophonator.
The Cacophonator is a generator of concrete music designed and created by Luca Collivasone from a sewing machine with attached chassis and the addition of recycled materials, springs, hardware tools, toys etc ….
The music composed and made at the cacophonator has its roots deeper in the aleatory music and in the research in the sound field of Pierre Shaeffer, more recently, however, the noise culture of Japanese derivation and the industrial genre are perhaps the most immediate references .

In reality both during the composition and the improvisation and during the liveset Luca Collivasone does not bother to remain anchored to a musical genre but freely accepts any influence that can contribute to generate a satisfying sound experience.
The moments of improvisation during the concerts at the cacophonator are preponderant, not having the instrument a well-defined intonation and even the possibility of generating chords the result is hardly predictable, it is the instrument and the appearance of unexpected sounds to determine the nature of the piece in execution, hence the haphazard nature of the music produced, the compositions take shape at the time and it is the musician’s task to enter into symbiosis with the instrument and face unexpected events or exploit interesting occasions.
As pointed out by some, the Cacophonator can almost be considered a modern art installation: in an era where everything seems to be already established by high technology objects, where everything is predictable and the result is almost certain, the cacophonator uses poor materials and it literally forces the user to an imaginative effort in order to dominate the machine and create something unexpected that in some cases can be surprised.